History of clothing and textiles

The study of the history of clothing and textiles traces the development, use, and availability of clothing and textiles over human history. Clothing and textiles reflect the materials and technologies available in different civilizations at different times. The variety and distribution of clothing and textiles within a society reveal social customs and culture. The wearing of clothing is exclusively a human characteristic and is a feature of most human societies, though it is not known exactly when various peoples began wearing clothes. Anthropologists believe that animal skins and vegetation were adapted into coverings as protection from cold, heat and rain, especially as humans migrated to new climates. Textiles can be felt or spun fibers made into yarn and subsequently netted, looped, knit or woven to make fabrics, which appeared in the Middle East during the late stone age. From the ancient times to the present day, methods of textile production have continually evolved, and the choices of textiles available have influenced how people carried their possessions, clothed themselves, and decorated their surroundings.Sources available for the study of clothing and textiles include material remains discovered via archaeology; representation of textiles and their manufacture in art; and documents concerning the manufacture, acquisition, use, and trade of fabrics, tools, and finished garments. Scholarship of textile history, especially its earlier stages, is part of material culture studies. 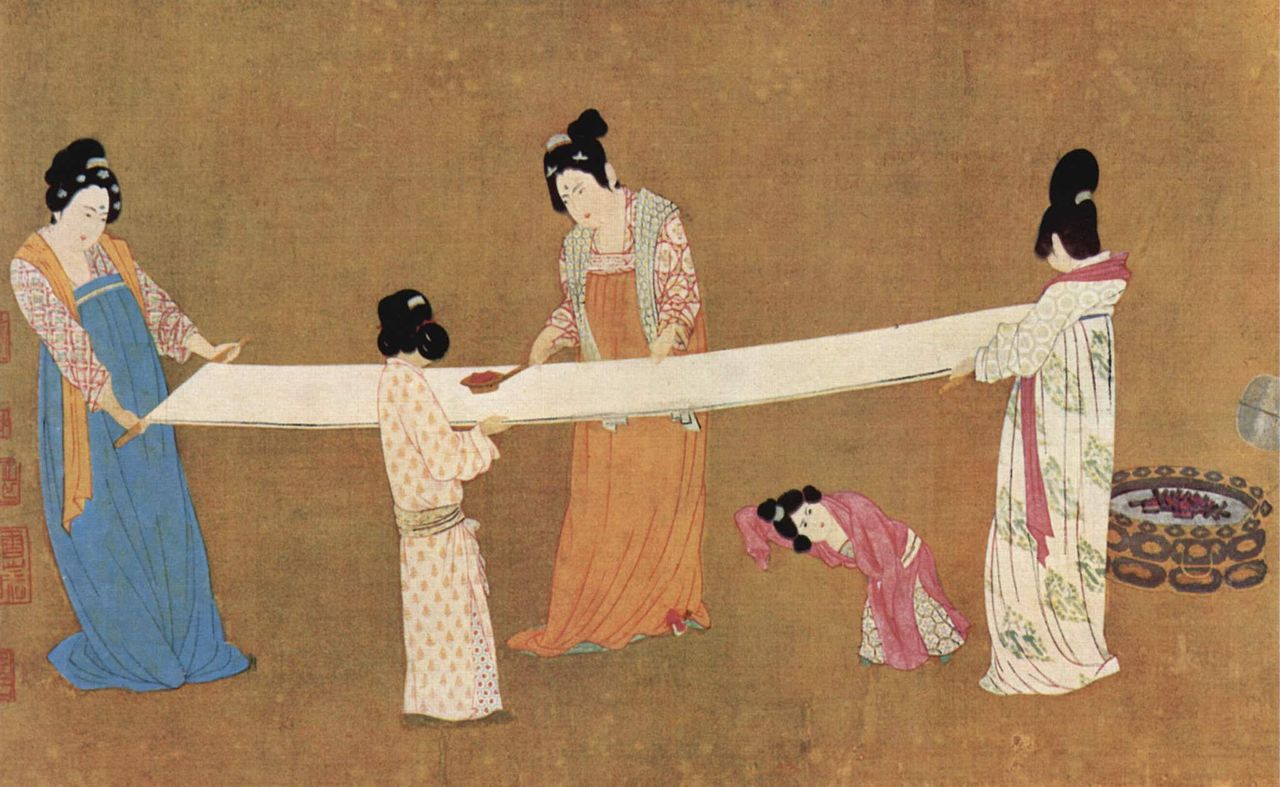 Prehistoric development
The development of textile and clothing manufacture in prehistory has been the subject of a number of scholarly studies since the late 20th century.[3][4] These sources have helped to provide a coherent history of these prehistoric developments. Evidence suggests that humans may have begun wearing clothing as far back as 100,000 to 500,000 years ago. 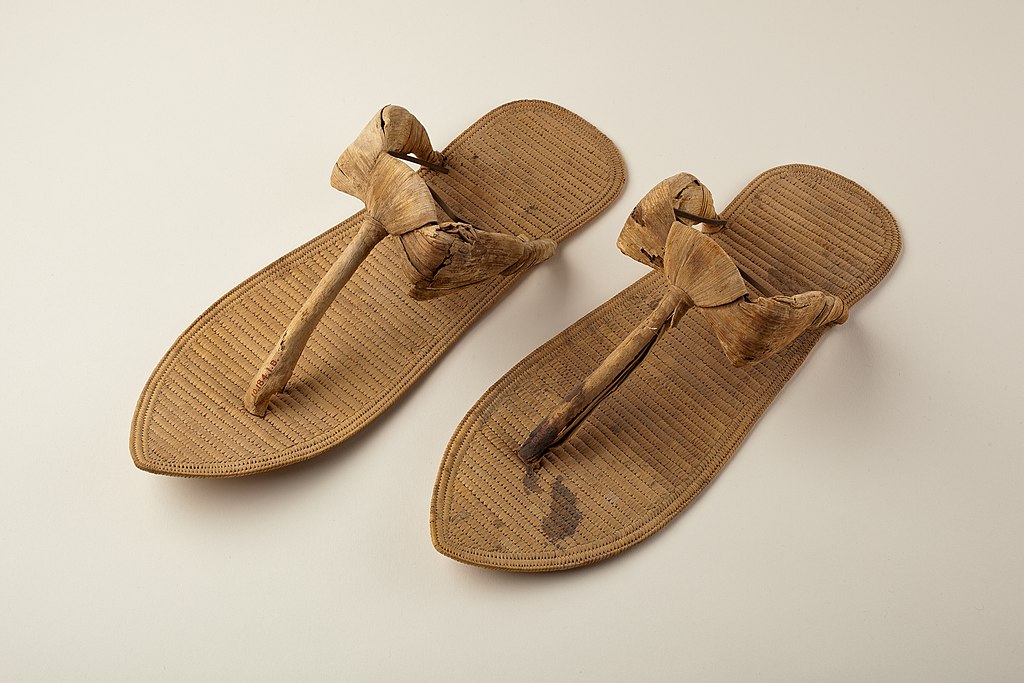 Early adoption of apparel
Genetic analysis suggests that the human body louse, which lives in clothing, may only have diverged from the head louse some 170,000 years ago, which supports evidence that humans began wearing clothing at around this time. These estimates predate the first known human exodus from Africa, although other hominid species who may have worn clothes – and shared these louse infestations – appear to have migrated earlier. Sewing needles have been dated to at least 50,000 years ago (Denisova Cave, Siberia) – and uniquely associated with a human species other than modern humans, i.e. H. Denisova/H. Altai. The oldest possible example is 60,000 years ago, a needlepoint (missing stem and eye) found in Sibudu Cave, South Africa. Other early examples of needles dating from 41,000-15,000 years ago are found in multiple locations, e.g. Slovenia, Russia, China, Spain, and France. The earliest dyed flax fibres have been found in a prehistoric cave in Georgia and date back to 36,000. The 25,000-year-old Venus Figurine "Venus of Lespugue", found in southern France in the Pyrenees, depicts a cloth or twisted fiber skirt. Other figurines from western Europe were adorned with basket hats or caps, belts were worn at the waist, and a strap of cloth that wrapped around the body right above the breast. Eastern European figurines wore belts, hung low on the hips and sometimes string skirts. Archaeologists have discovered artifacts from the same period that appear to have been used in the textile arts: (5000 BC) net gauges, spindle needles, and weaving sticks. 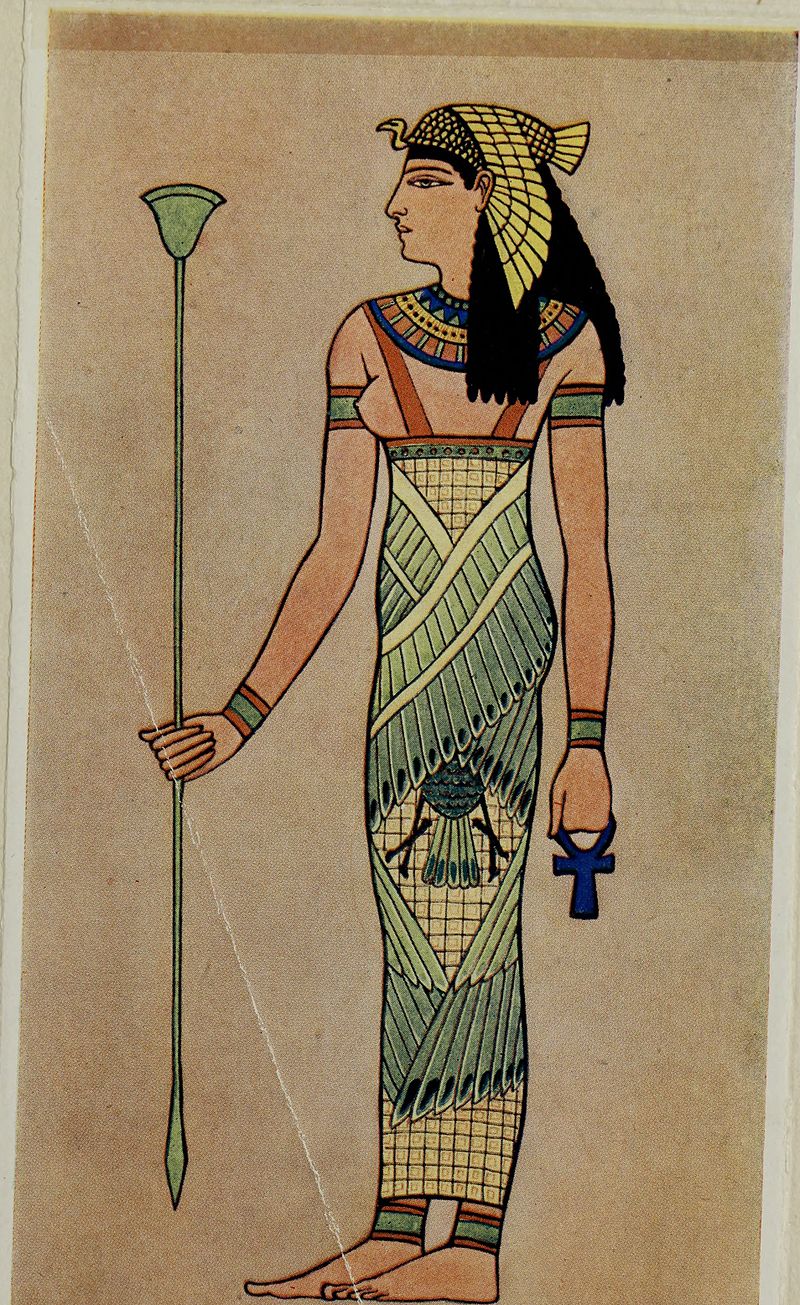 Ancient textiles and clothing
The first actual textile, as opposed to skins sewn together, was probably felt. Surviving examples of Nålebinding, another early textile method, date from 6500 BC.[citation needed] Knowledge of ancient textiles and clothing has expanded in the recent past due to modern technological developments.[7] Our knowledge of cultures varies greatly with the climatic conditions to which archeological deposits are exposed; the Middle East and the arid fringes of China have provided many very early samples in good condition, but the early development of textiles in the Indian subcontinent, sub-Saharan Africa and other moist parts of the world remains unclear. In northern Eurasia, peat bogs can also preserve textiles very well. The first known textile of South America was discovered in Guitarrero Cave in Peru. It was woven out of vegetable fibers and dates back to 8,000 B.C.E. From pre-history through the early Middle Ages, for most of Europe, the Near East and North Africa, two main types of loom dominate textile production. These are the warp-weighted loom and the two-beam loom. The length of the cloth beam determined the width of the cloth woven upon it, and could be as wide as 2–3 meters. The second loom type is the two-beam loom. Early woven clothing was often made of full loom widths draped, tied, or pinned in place. 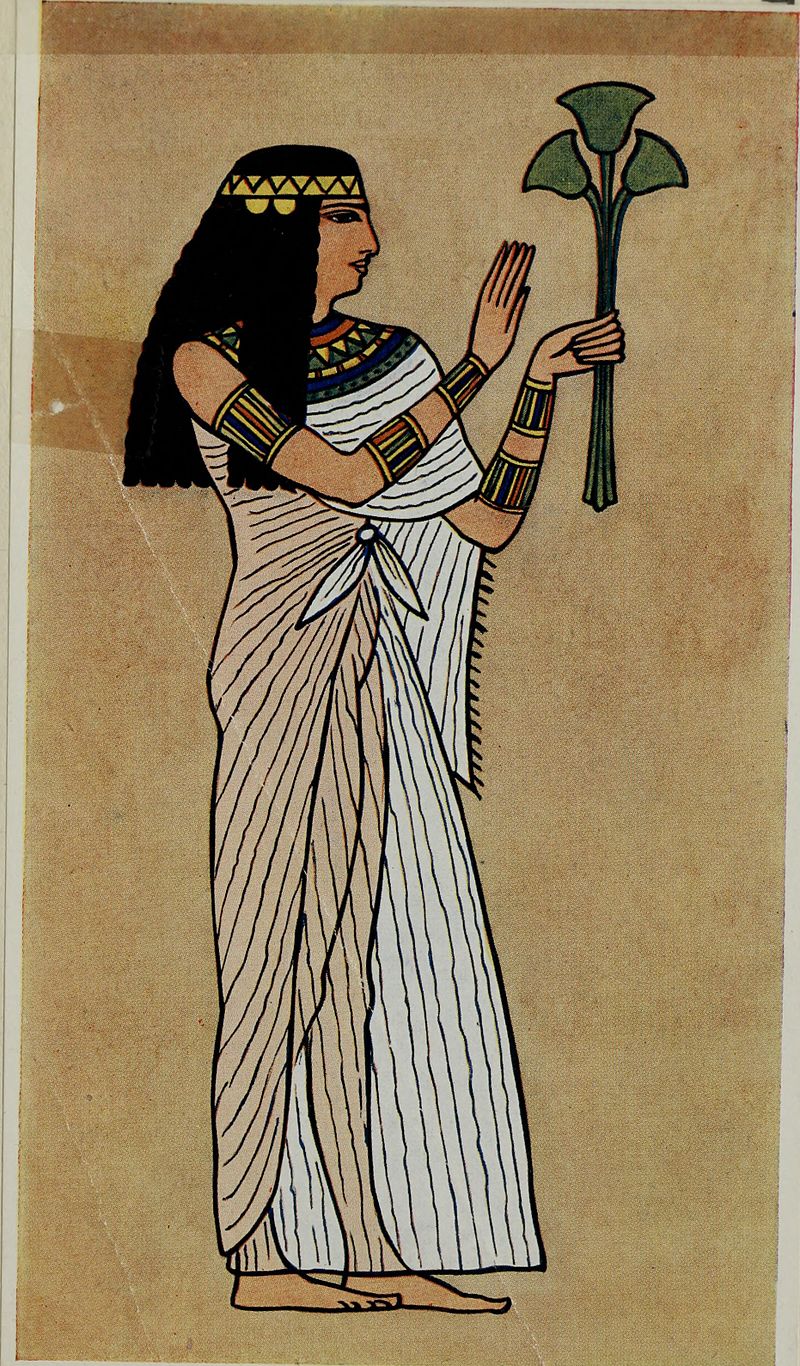 The textile trade in the ancient world

Throughout the Neolithic and Bronze Ages, the fertile grounds of the Eurasian Steppe provided a venue for a network of nomadic communities to develop and interact. The Steppe Route has always connected regions of the Asian continent with trade and transmission of culture, including clothing. Around 114 BC, the Han Dynasty,[9] initiated the Silk Road Trade Route. Geographically, the Silk Road or Silk Route is an interconnected series of ancient trade routes between Chang'an (today's Xi'an) in China, with Asia Minor and the Mediterranean extending over 8,000 km (5,000 mi) on land and sea. Trade on the Silk Road was a significant factor in the development of the great civilizations of China, Egypt, Mesopotamia, Persia, the Indian subcontinent, and Rome, and helped to lay the foundations for the modern world. The exchange of luxury textiles was predominant on the Silk Road, which linked traders, merchants, pilgrims, monks, soldiers, nomads and urban dwellers from China to the Mediterranean Sea during various periods of time.

Ancient Near East
The earliest known woven textiles of the Near East may be fabrics used to wrap the dead, excavated at a Neolithic site at Çatalhöyük in Anatolia, carbonized in a fire and radiocarbon dated to c. 6000 BC. Evidence exists of flax cultivation from c. 8000 BC in the Near East, but the breeding of sheep with a wooly fleece rather than hair occurs much later, c. 3000 BC. In Mesopotamia, the clothing of a regular Sumerian was very simple, especially in summer, in the winter wearing clothes made of sheep fur. Even wealthy men were depicted with naked torsos, wearing just some kind of short skirt, known as kaunakes, while women wore long dress to their ankles. The king wore a tunic, a coat that reached to his knees, with a belt in the middle. Over time, the development of the craft of wool weaving has led to a great variety in clothing. Thus, towards the end of the 3rd millennium BC and later the men wore a tunic with short sleeves and even over the knees, with a belt (over which the rich wore a wool cloak). Women's dresses featured more varied designs: with or without sleeves, narrow or wide, usually long and without highlighting the body.

20th-century developments
The 20th century is marked by new applications for textiles as well as inventions in synthetic fibers and computerized manufacturing control systems.

Unions and education
In the early 20th century, workers in the clothing and textile industries became unionized in the United States. Later in the 20th century, the industry had expanded to such a degree that such educational institutions as UC Davis established a Division of Textiles and Clothing,[60] The University of Nebraska-Lincoln also created a Department of Textiles, Clothing and Design that offers a Masters of Arts in Textile History,[61] and Iowa State University established a Department of Textiles and Clothing that features a History of costume collection, 1865–1948. Even high school libraries have collections on the history of clothing and textiles.

New applications
The changing lifestyles, activities, and demands of the 20th century favored clothing producers who could more effectively make their products have desired properties, such as increased strength, elasticity, or durability. These properties may be implemented through mechanical solutions, such as different weaving and knitting patterns, by modifications to the fibers, or by finishing (textiles) of the textiles. Since the 1960s, it has been possible to finish textiles to resist stains, flames, wrinkles, and microbial life. Advancement in dye technology allowed for coloring of previously difficult-to-dye natural fibers and synthetic fibers.

Following the invention of plastics by petroleum and chemical corporations, fibers could now be made synthetically. Advancements in fiber spinning actuators and control systems allow control over fiber diameter and shape, so Synthetic fibers, may be engineered with more precision than natural fibers. Fibers invented between 1930 and 1970 include nylon, PTFE, polyester, Spandex, and Kevlar. Clothing producers soon adopted synthetic fibers, often using blends of different fibers for optimized properties.[64] Synthetic fibers can be knit and woven similarly to natural fibers.

Automation and numeric control
The early 20th century continued the advances of the Industrial Revolution. In The procedural loops required for mechanized textile knitting and weaving already used logic were encoded in punch-cards and tapes. Since the machines were already computers, the invention of small-scale electronics and microcontrollers did not immediately change the possible functions of these machines. In the 1960s, existing machines became outfitted with computerized numeric control (CNC) systems, enabling more accurate and efficient actuation. In 1983, Bonas Machine Company Ltd. presented the first computer-controlled, electronic, Jacquard loom.[65] In 1988, the first US patent was awarded for a "pick and place" robot.[66] Advancements such as these changed the nature of work for machine operators, introducing computer literacy as a skill alongside machine literacy. Advances in sensing technology and data processing of the 20th century include the spectrophotometer for color matching and automatic inspection machines. 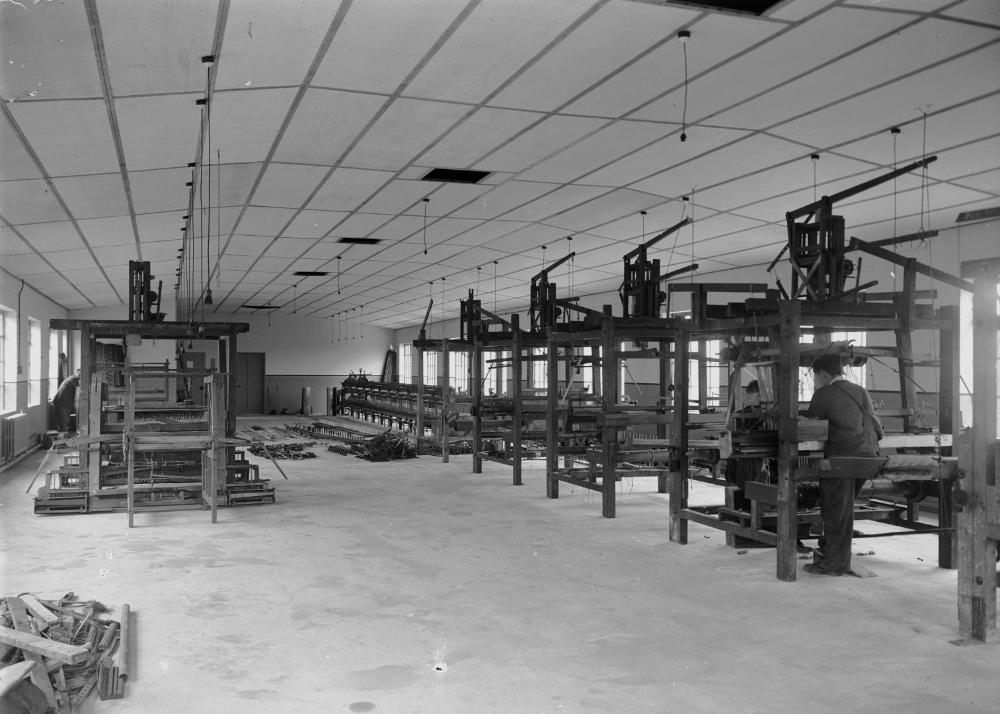 21st century issues
In the 2010s, the global textile industry has come under fire for unsustainable practices. The textile industry is shown to have a `negative environmental impact at most stages in the production process. Global trade of secondhand clothing have promise for reducing landfill use, however international relations and challenges to textile recycling keep the market small compared to total clothing use. Advancements in textile treatment, coating, and dyes have unclear affects in human health, and textile contact dermatitis is increasing in prevalence among textile workers and clothing consumers. Scholars have identified an increase in the rate at which western consumers purchase new clothing, as well as a decrease in the lifespan of clothing. Fast fashion has been suggested to contribute to increased levels of textile waste. The worldwide market for textiles and apparel exports in 2013 according to United Nations Commodity Trade Statistics Database stood at $772 billion. In 2016, the largest apparel exporting nations were China ($161 billion), Bangladesh ($28 billion), Vietnam ($25 billion), India ($18 billion), Hong Kong ($16 billion), Turkey ($15 billion) and Indonesia ($7 billion). 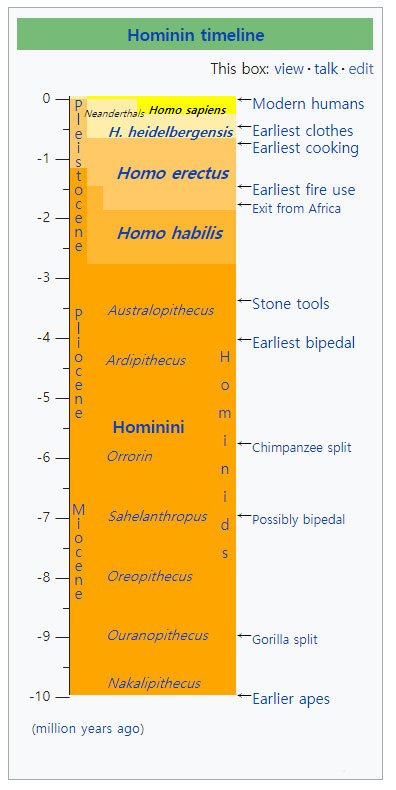