If you want to look your best, then you’ll need to take care of your clothes. A lot of people make the mistake of assuming that the brand they wear is the most important thing, but the condition and sizing of your clothes will matter far more. A fresh-pressed dollar store shirt will always look better than a wrinkled and creased designer camisole.

There are a lot of ways to maintain your clothes, but most people are content with washing and ironing their things and getting on with their lives. However, certain fabrics tend to pill and accumulate lint, and they’ll require an additional step so that they can keep looking their best.

This is where a good electric lint roller comes into play. What is an electric lint roller, you may ask? Electric lint rollers are tools that help you get rid of the little balls of fabric (known as pills) that accumulate on materials like wool, cotton, and polyester. There are a few different kinds of lint removers that you can purchase, so let’s go over them.

The most common type is the reusable lint roller, and it’s likely that you’ve used one of them before. Lint rollers feature a simple design, consisting of a roll of adhesive sheets wrapped around a handle. To use them, you simply roll them over your clothes, and they’ll pick up the little bits of fabric that have accumulated.

On the other hand, an electrical lint remover will feature a power source, and it will typically be more effective than a simple roller in exchange for a higher price. In this guide, we’re going to find out what is the best lint roller and the best electric lint remover by reviewing five of the top products on the market. We’ll cover three electric models and two rollers to ensure that all of our readers can find a product that works for them.

Overview
The Conair Fabric Defuzzer is one of the best lint removers for sweaters or other clothes that tend to accumulate lint and fabric pills. If you’re looking for something that is easy to use and affordable, then there is no better choice than this product which will ensure that you never need to buy lint roller sheets again.

With a choice of three depth settings, you can optimize this lint remover to deal with various levels of pilling, and you won’t have to worry about it damaging the fabric itself. Thanks to the 1-⅞ inch surface, you won’t have to sit around all day as it will remove a lot more lint at once when compared to other models.

The Conair Fabric Defuzzer is also versatile, as it can be used with furniture and curtains, so you can keep every surface in your home free of lint. With a detachable fuzz collector, you won’t have to worry about awkward hinging mechanisms or anything else getting in the way when you want to dump the lint.

This model is also a lot more convenient than wired electric lint removers because of the lack of a cord. When you’re working on your clothes, you won’t have to worry about the wire getting in your way. You can also bring this lint remover anywhere in the house without being anchored to an outlet.

The inclusion of an easy-grip handle means that this lint remover is comfortable, even if you plan on using it for an extended period of time. If you’ve never used an electronic lint remover before, you’ll find that this model is easy to use, as it only features an on/off switch and the depth control button.

One of the only downsides is that this lint remover doesn’t come included with the two AA batteries that it needs to operate. The Conair Fabric Defuzzer also comes in a wide range of colors, including pink, orange, green, and more. Overall, this is an excellent product that combines ease of use with outstanding performance. 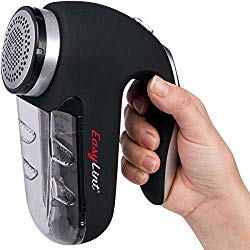 Overview
If you’re willing to spend a little more money on your new lint remover clothes won’t stand a chance against this model from AlwaysLux. The EasyLint lives up to its name by making it much simpler to remove lint, pilling, and more from your clothes, and its reliable design means that it’s built to last.

While many electric lint removers will feature an ergonomically shaped handle, the EasyLint takes it a step further with a soft grip design that is even more comfortable. If you like to remove lint from clothes in one long session or if you’re planning on using this with your furniture, the handle will help immensely.

As for performance, this model uses a 5W motor to spin the blades that eliminate lint and pilling, and it all gets deposited in the clear, removable reservoir. The lint container is clear so that you can see it filling up, but it’s large enough that it’s unlikely to fill up in a single session.

The stainless steel cutting blades are meant to be durable, but you can replace them when they eventually wear out. Many competing products don’t feature replaceable blades, and the entire unit will have to be replaced when they grow dull. The EasyLint even comes included with free replacement blades.

This model features a 2.5-inch shaving head, which means that it can cover a larger area with each pass, saving you time as you remove lint from your clothes. With a 69-inch cord, you won’t have to worry about being stuck next to an outlet while you use this lint remover, and you won’t have to waste money on batteries.

There are a few extras that come included with this electric lint remover, including a carrying case, so you won’t have to worry about it getting damaged if you ever need to bring it along with you. Our verdict is that this is an excellent product for customers who are willing to spend a little bit more on their lint remover.

Overview
The Remington Fuzz-Away is designed for customers who prize portability above all else, so if you travel a lot and you like to keep your clothes lint-free, then you’ll love it. This little device is about the size of a soda can, but despite its dimensions, it’s more powerful than some full-sized lint removers.

Along with its small size, this lint remover is also light, so you won’t have to worry about it tiring your arm or weighing down your luggage. Since it’s so powerful, this lint remover features Safe T Blade technology, which ensures that the fabric of your clothes won’t be damaged by the cutting motion.

Even though it’s so small, this model is still equipped with a removable storage compartment that holds the lint as it is gathered from your garments. Since you can take it out of the unit, you can thoroughly clean it out. You can even remove the face of the cutter and clean out the internals.

For customers who have never used an electric lint remover, this one is easy to get accustomed to as it only features an on/off switch. The metal guard has the dual purpose of protecting your fabric from the spinning blades and also protecting the cutting edges themselves from damage when not in use.

This model is also surprisingly affordable, and it features excellent build quality for the price. The unit is made out of durable plastic, and it even survived a few drop tests, so you won’t have to worry about it being easily damaged. This also ensures that the Fuzz-Away won’t get damaged in transport.

Due to the wireless design, this lint remover needs two AA batteries (not included). You’ll have a lot more freedom while using this model thanks to the lack of a power cable. Overall, this is the best choice of lint remover clothes cleaner for customers who prefer portability but don’t want to sacrifice performance.