While Charles Worth and his ilk had monopolized the heavily adorned and radically contorted body cuts, a backlash was brewing. Industrial elite members of the "Grand Denial" sought a more discrete luxury and sober distinction in their fashions. Moralists felt that the modern fashions were shameful and ostentatious, and they sought a return to "worker-friendly" produced clothing that was natural and free from dyes. This was perhaps the first known market demand for ethical fashion! Ironically, these market trends are repeated today. 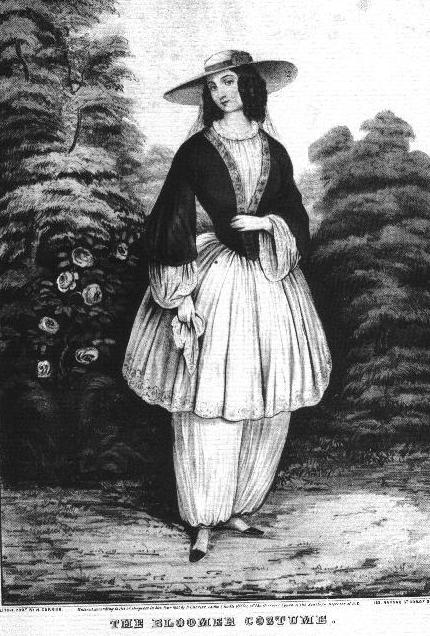 The Dress Reform Movement was mass-publicized by Amelia Bloomer in the US around the 1840s and -50s, and was closely related to the first feminist movements (and now *sort of* I know why my Grandma used to call "undies" bloomers).

In response to the immobility that 18th Century fashion imposed on women, Ms. Bloomer created a costume that included the upper layers of a traditional dress, shortened to form a below-the-knee skirt over Turkish-style pants, tied at the ankle cuffs.

This costume did not show more of the body than traditional dresses of the period, but it was still found unacceptable because the trouser shape (in any form) was only for men.

While other notable feminists including Susan B. Anthony wore the Bloomer costume, although the look was heavily ridiculed. It would not take long for Ms. Bloomer herself to abandon the look.

Forms of the Bloomer costume were occasionally retained for athletic activities, as witnessed at Vassar College where physical education was added to the curriculum in 1865.

it is specially desired that the dress of students shall not be expensive . . . but rather such clothing as will not be injured by active sports and vigorous exertion.” ~ 1865 Vassar College Handbook excerpt 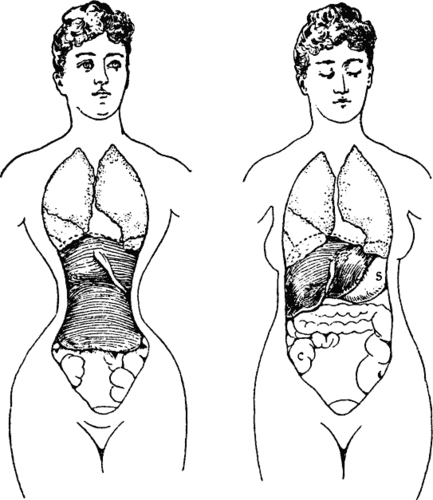 Ironically, it would not be until after her death in 1895 when Ms. Bloomer's design would become socially acceptable among the majority of active women.

In addition to radicals, social reformers and feminists, doctors and hygienists also supported the Dress Reform Movement. They stressed the medical dangers of corsets, and claimed that women should wear no more than 6.5 lbs (3 kilos) of undergarments as opposed to the more standard 13 lbs (7 kilos) containing the crinoline, corset and other accouterments.

Perhaps the most notable member of the hygienic/rational dress movement was a designer/producer named Dr. Gustave Jaeger. Based on his studies in zoology and anthropology, Jaeger was convinced that one would automatically appear more aesthetically-pleasing in clothing that drew toxins from the body and allowed the skin to breathe. He theorized that only un-dyed animal fibers could achieve this affect, and in turn began to produce the Jaeger system of undergarments and suiting. 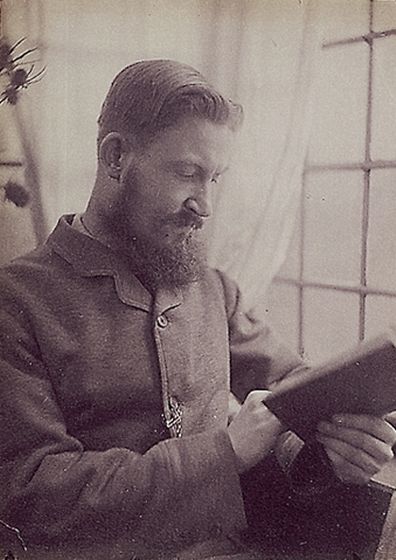 He began to reach commercial success in the 1880s, although his style of liberating woolen suit forms in autumn colors continued to resonate with the British until the mid-20th Century. Among his peers were other outspoken reformers, eccentrics and artists, including Oscar Wilde and George Bernard Shaw, who was seldom seen in his youth without his rust-colored Jaeger suit.

They pushed the concept that fashion could be used to represent an ideological point of view, and that personal comfort should reign supreme. Within 20 years, this concept would become a given to fashion consumers.

(Shaw's suit) had become a part of his personality; one can come to think of the reddish-brown Jaeger suit as if it were a sort of reddish-brown fur, and was, like the hair and eyebrows, part of the animal...

In any case his brown woolen clothes, at once artistic and hygienic, completed the appeal for which he stood; which might be defined as an eccentric healthy-mindedness."  ~G.K Chesterton about George Bernard Shaw 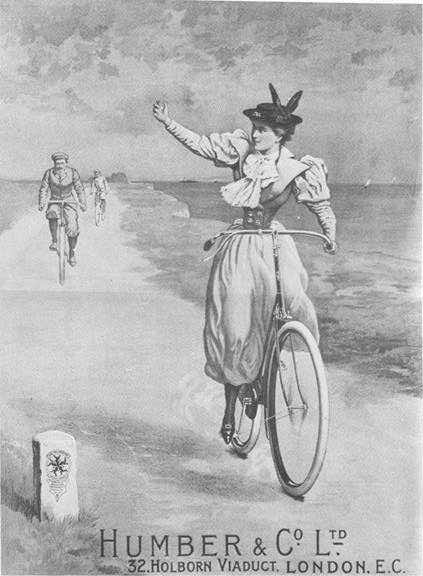 The expansion of industry and the improvement of living conditions saw the advancement of leisure activities. Sports became increasingly fashionable among upper-class women, who in turn needed specific kinds of clothing for these activities. From the last years of the 19th Century through the first decades of the 20th Century, cycling, swimming, golf and riding were especially popular. Industrial advances had made it possible to begin some form of standardized production which had proven quite challenging to the customized intricacies of more formal women's attire, yet which proved accommodating to active wear. The combination of industrial advances, wealth accumulation and social change had led to the fastest diffusion of fashion styles the world had yet seen. The idea that, from this point forward, fashions would continue to emerge and be diffused at an ever-increasing rate has led to our understanding today of marketing dynamics and brand identity. But more on that later...